The black rockfish fishery off the coast has been excellent with anglers scoring easy limits on one of the best tasting white fish.

Nakajima began cooking in Seattle-area Japanese restaurants in his teens, and fell in love with all aspects of restaurant life. At age 18, he moved to Osaka, Japan to learn the depth of his native culture and to attend Tsuji Culinary Arts School, one of Japan’s most prestigious.

Following graduation, Shota had the opportunity to apprentice under Michelin Star Chef Yasuhiko Sakamoto. When Nakajima returned to Seattle, he worked for Chef Taichi Kitamura at Sushi Kappo Tamura in 2011 and 2012.

In 2014, he opened his own catering business, Kappo Kitchen, and that December, he won the Seattle round of the World Washoku Challenge 2014. With great anticipation from fans of his beautiful, stylized Japanese cooking, Shota opened Naka in June of 2015.

Where to catch black rockfish

Westport, La Push, Neah Bay and Ilwaco have become the hot-beds for black rockfish and lingcod during spring and summer, and when the weather cooperates it is a no-brainer for charter boats to score limits of fish.

Charters will usually head out in the mornings to catch abundant black rockfish (10-fish daily limit), and then move on to deeper waters for lingcod.

The season for both bottomfish species will continue daily through mid-October. There are shore-bound options off the Westport and Ilwaco jetties to catch black rockfish.

2.5 ounces of rockfish per dish

One cherry tomato per dish

One morel mushroom per dish

One myoga (Japanese ginger, available at Uwajimaya and some other local Asian grocery stores)

3 tablespoons plus ½ teaspoon of dashi (Japanese stock broth, available at Uwajimaya and some other local Asian grocery stores)

(Note: The ingredients make one serving dish per person)

1. Peel the fava beans, and cut the cherry tomato and morel mushroom in half.

2. Cut myoga in half and then thinly slice, and wash in ice water (make sure not to damage the fiber).

4. Add the dashi, soy sauce and mirin into small pan, and let it come to a boil and remove sauce mixture from the heat.

1. Coat the rockfish, fava beans and the morel mushroom in potato starch.

3. Plate the rockfish, fava beans and morel mushroom in a bowl.

4. Pour the sauce made during prep on the top of rockfish and vegetables making sure it gets all the flavors soaked in.

5. Top it off with the thinly sliced myoga. 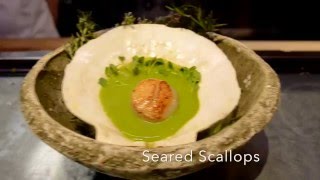